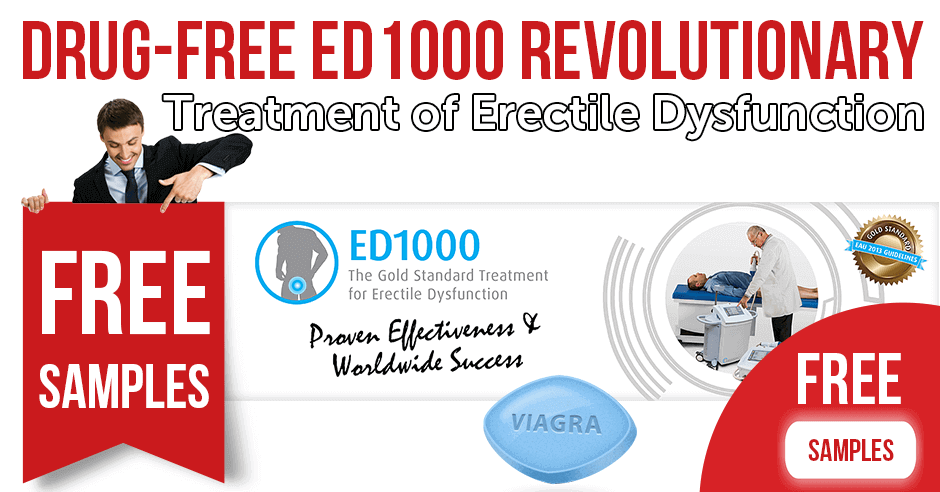 Viagra and Cialis have won great popularity among men of all ages, as they helped 70% of ED patients. Still, they had several weak points, e.g. limited time of action, the need to take the pill 30 minutes before sex, possible side effects, etc.,let alone those unlucky 30% of men who are unresponsive to the drugs. Are there any alternative options? Yes, there are, we will tell you about one of them in this review.

Phosphodiesterase type 5 inhibitors, or PDE5 for short, became a true panacea for sexual problems, which appeared on the eve of the 21st century. The major advantage of these pills was that they restored the natural erection, but unfortunately, hundreds of thousands of men with intimate maladies could not use them due to a number of reasons.

Some were on nitrate medications, others could not tolerate the side effects of Viagra and its congeners. One way or another, the oral medications did not help everyone, and urologists all over the world were trying to find a remedy for those individuals.

It was important to invent something that would bring back the natural erection, as well as the PDE5 inhibitors did. In 2008, the group of scientists from the New York Memorial Sloan Kettering Cancer Center, the Department of Urology, investigated the effects of shock waves on the penile tissues in rat models. The acoustic wave therapy was applied to treat various diseases by that time, from kidney stones to musculoskeletal and cardiovascular disorders. The research of Dr. Muller and colleagues gave a hope that it can also help with ED. The further studies have approved this suggestion.

The company Medispec Ltd., which specializes in the shock wave medical equipment, offers versatile systems to treat heart and vessels diseases, orthopedic ailments, urolithiasis, prostate enlargement, vaginal disorders, and even cellulitis. Erectile dysfunction has not escaped their attention either. The Medispec experts have designed an innovative device to treat various male sexual problems.

This device is Medispec ED1000, which utilizes shock wave therapy for ED treatment. This is a non-invasive technology, nor does it involve any pharmaceuticals. There are two modifications of the device — the original one, and ED1000 Desktop. Both versions use the same technology, which is now approved in Canada and Europe. The USA medical authorities have limited the use of ED1000 to investigational purposes, but the Medispec team hopes that will change soon. They have provided the data of numerous clinical trials that confirm the effectiveness and safety of this revolutionary treatment.

During the EDSWT session — which means the erectile dysfunction shock wave therapy — the extracorporeal low-intensity acoustic waves are targeted at the tissues of the penis, more particularly, at the vessels of the shaft and crus. This improves the blood flow to the erectile tissues, which in turn restores the erection. This method is good for all patients with vasculogenic erectile dysfunction, including men with diabetes. More importantly, ED1000 is effective in 73% of men who are non-responsive to Viagra or Cialis. 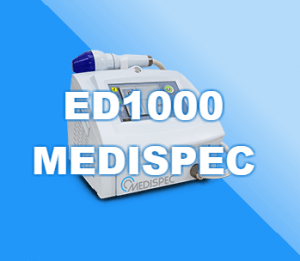 Moreover, it treats some other conditions, such as:

Still, there are certain conditions that are contraindicated to EDSWT; they include penile, testicular, prostate cancers, or other tumors close to the treatment area. Obviously, this method will not be effective in cases when ED has other causes than vasculogenic nature.

How Therapy Works for Men

The mechanism of action of the shock wave therapy was discovered in the years of World War II, when the submarine crew members were diagnosed with various internal traumas, even though their ships had not damaged. It was found then that the sonic waves, produced by the bomb explosions, transmitted through their bodies and caused small injuries. In 1980, this effect was used for kidney stone fragmentation. In 1999, Drs. Caspari and Erbel published the results of their clinical trials of shock wave therapy, where they confirmed its effectiveness for revascularization. More recent studies show that the extracorporeal acoustic wave treatment induces nerve regeneration and angiogenesis in animal models with ED.

ED1000 emits sonic waves which are concentrated on the area that needs a treatment. In case of erectile dysfunction, they are directed to the corpus cavernosum and penile vessels. These waves, together with the energy they carry, produce pressure impulses, which disturb the tissues. This leads to microtrauma, and induces a chain of reactions. First of all, the stimulated cells produce certain bioactive compounds, like adenosine triphosphate and nitric oxide. After a consequence of biochemical processes, shock wave treatment promotes cell proliferation, regeneration of nerves, and formation of new vessels. In simple terms, ED1000 damages the vessels in the penis that do not work properly, and causes your body to grow the new ones. This eventually restores your natural erection.

Will You Have to Be Hospitalized?

There is no need for hospitalization when receiving EDSWT. You will have to visit a doctor to get a general medical check-up and make sure that your ED case is eligible for ED1000 application. A doctor will check your health record, measure blood pressure and temperature, etc. The extent of the erectile dysfunction will also be preliminary evaluated. After that, you will have to make a series of short visits to the urologist, who will do all the procedures. They do not require any sedation or postoperative care, thus there is no need to stay in the hospital.

How Long Does Session Take? 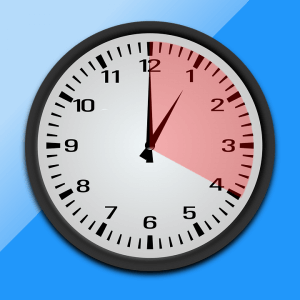 Each visit will not take more than half an hour, while the treatment session itself lasts around 20 minutes. The complete course includes 12 sessions. Usually, two sessions in a week are administered. By the way, you can pay for the therapy once and enjoy its long-lasting effects, while the cost of oral drugs accumulates with every pill. You will be comfortably placed on the couch, and the medical specialist will start the procedure.

If you have any unpleasant sensations or feel uncomfortable, you can alert your physician. A doctor may change the position of your couch, or consider another cure. Be aware, though, that the pulsation in the pelvic area and rhythmic loud clicking are a part of the therapy.

What Results Can You Expect?

You can see the notable improvements in sexual health after 6 EDSWT sessions, or 3 weeks of treatment. Dr. Shin-ichi Hisasue from Japan has examined the effectiveness of ED1000 in 41 patients between 37 and 83 years of age. All of them either could not get an erection at all, or did not harden enough for penetration. The experiment lasted for 4 weeks, then the sexual function of the examinees was measured and compared to the baseline testing. The results were rather promising, as 3 men had completely hard and rigid boners, and the erections of 20 patients were next to normal enough for intercourse. The patients had significantly higher scores in the test called Sexual Health Inventory for Men (SHIM), they also showed the increased penile tumescence after the shock wave therapy sessions.

The Israeli doctors investigated the duration of the EDSWT effects, the results of their study was published in the Journal of Urology in 2018. They have observed 156 men for two years after treatment, and came to a conclusion that the outcome of the shock wave therapy for ED depends on the baseline severity and causes of the sexual dysfunction. For instance, the positive effect of the treatment faded away completely within 24 months in men with diabetes, while almost 75% of patients with moderate ED and no concurrent diseases had preserved the beneficial effects of ED1000 for this period of time. 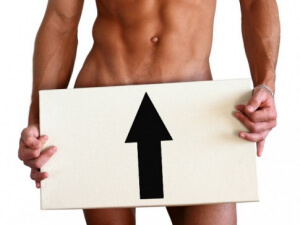 In order to prolong the benefits of the treatment, some doctors recommend making no-treatment intervals between the series of sessions. Dr. Ilan Gruenwald et al. has used the following schedule in his research: 2 sessions per a week for 3 weeks, then another 3 weeks without treatment, and then the cycle repeats. His method was very successful, most of his patients were able to achieve an erection two years after the discontinuation of the shock wave therapy. Dr. Ramasamy from the University of Miami, USA, uses another method — he administers daily 10 minutes sessions five days in a row. He repeats this after a month, then after 3 months, and then in a half of a year. His patients are up to 80 years old, and Dr. Ramasamy claims that his method has helped most of them during the trials.

EDSWT is a completely painless, non-invasive procedure, you do not have to take any medications before or after the treatment. This makes the low-intensity shock wave therapy (LISWT) for ED totally safe for patients. The sonic waves, applied in ED1000, have lower power than those used for kidney stones treatment. Thus, you will not even need put on any ear protection because of the too loud noise, as happens during the lithotripsy. Doctors from the Specialized Medical Institute in Buenos Aires, Argentina, have researched the efficacy and safety of LISWT, and none of their testees had any adverse reactions related to the treatment.

What Side Effects Can Be?

While ED1000 has been practiced for years, there were no reports about any severe side effects, neither during a procedure, nor after it. Some patients felt slight tickling in the groin area, but it stopped right after the procedure was finished. However, a certain part of the medical community claims that the currently available clinical data is not enough to approve the device for therapeutic use. Some famous doctors say that the trials conducted at the time are not enough, and they need more research to make sure that this technology is not only effective, but also does no harm to their patients. 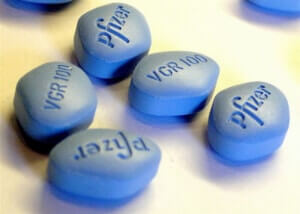 The U.S. Food and Drug Administration, a.k.a. FDA, has not approved the ED1000 yet, hospitals and medical centers can use it strictly for scientific purposes. The only shock wave machine, which has the FDA certificate, is the one that cures diabetic foot ulcers. So, if you choose between EDSWT and PDE5 inhibitors, it is better to wait until this novel cure receives all approvals. It is important to be 100% sure that you pay for effective and safe treatment.

In ViaBestBuy online drugstore you can find all popular ED pills, and not only that, we have medications that cure another severe sexual problem — premature ejaculation (PE).

Here are some of the brands represented in our internet pharmacy:

This is not a full list, you can look through our catalog and find your favorite pill there. Our prices are a pleasant surprise for newcomers, especially when they enjoy the highest quality of the drugs we offer. You can try our free samples to see for yourself. Our loyal customers get a present with every delivery, moreover, they can have 35% off if they pay with bitcoins.

Sexual problems may disrupt your life, there is no time to wait for a doctor’s prescription, or for some new device to get approval from bureaucrats. Visit ViaBestBuy drugstore and buy any pill over the counter, for the lowest price, and with 100% guarantee of successful treatment.