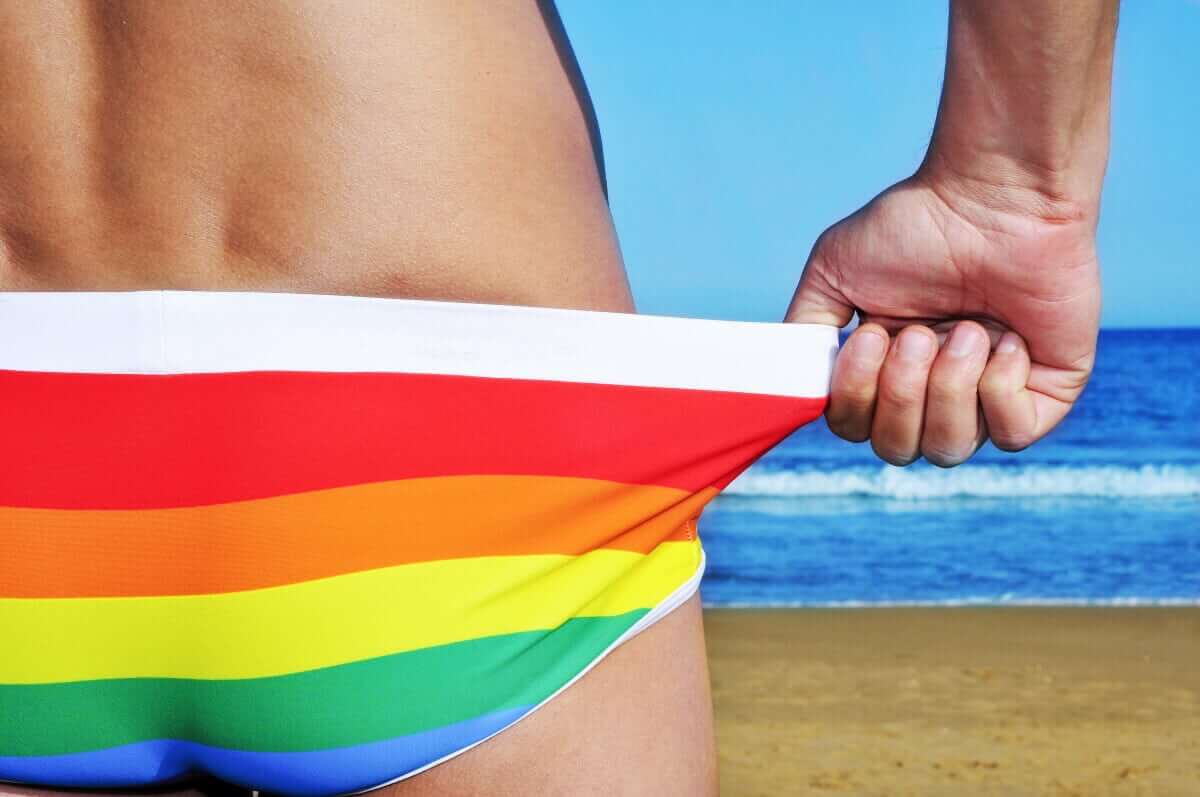 Need a few LGBT-friendly destination ideas? Recent changes at these ten hottest places around the world have thrust them to the top 10 gay destinations 2016. Now let the planning begin! 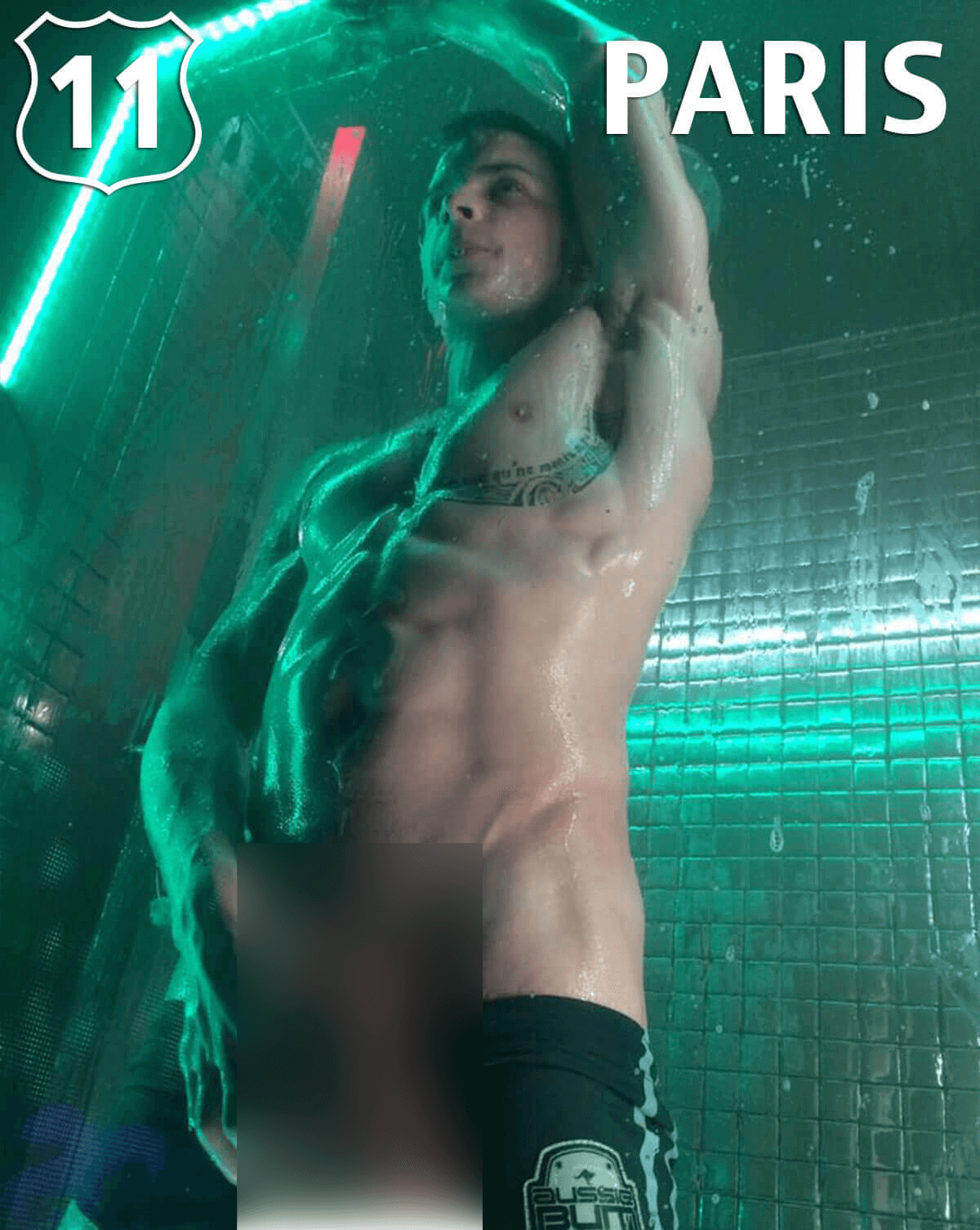 If you thought Paris stood only for straight romance, you should visit the Marais, a predominantly gay area in the heart of Paris where gay bars and clubs dominate the scene. Parisian couples of any orientation don’t hesitate to show affection on the streets, and if you’re in the mood for flirting, you’re sure to have a lot of ‘Ooh-la-la’ fun.

It’s a great place to visit at any time of the year, but June is the time for Gay Pride, and some really over-the-top antics spill out onto the streets as the lads strut their stuff. Paris is gay friendly from end to end, but the Marais is the place to go if you’re hoping to discover if French lovers are as hot as they’re supposed to be.

Get a trendy outfit that screams ‘Paris’, take in some arts and culture and then party the night away in one of the many gay-oriented establishments. You’re sure to have a ball! The shower show at Raidd bar is a MUST-SEE! 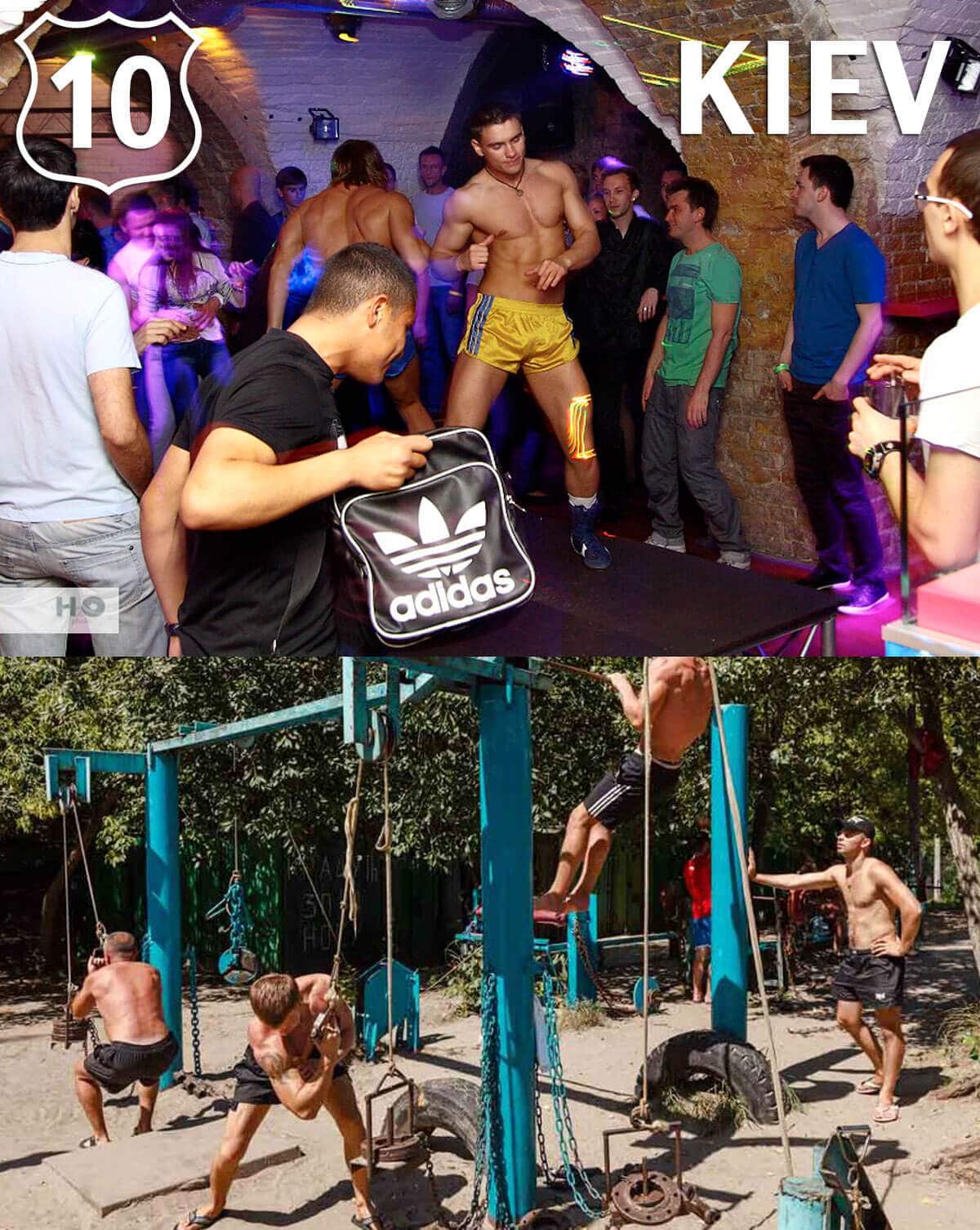 You can’t help noticing the positive energy in Kiev. It’s full of kind and friendly people – and ordinary guys who like to get acquainted with tourists – hopes of emigration are high!

In the afternoon you can sunbathe on the gay beach. Take an evening stroll along the banks of the Dnieper, and at night to go to the biggest gay club, Androgin. It’s famous for its excellent shows. And around 3am in the morning everyone moves closer to the city center to continue the party at a popular gay club called Andy Bar, which is located right on Khreschatyk. There you will find the most beautiful people, cheap cocktails and modern European music.

In this extraordinarily beautiful city, which is reminiscent of the great cities of Europe, you can feel like a king with as little as $100 in your pocket. A complete meal in “Puzata hata” will cost you $4-5, cappuccino – $1-2, but hotels in Kiev are very expensive. The best time to travel to Kiev is from early May to early November. Kiev is #10 in our top 10 gay destinations 2016.

P.S. On the way to the gay beach you will see the most brutal outdoor gym in the world – it is located directly under the open sky on the bank of the Dnieper. This huge gym is free, so there is always a crowd and there are plenty of trendy Ukrainian lads with perfect bodies! 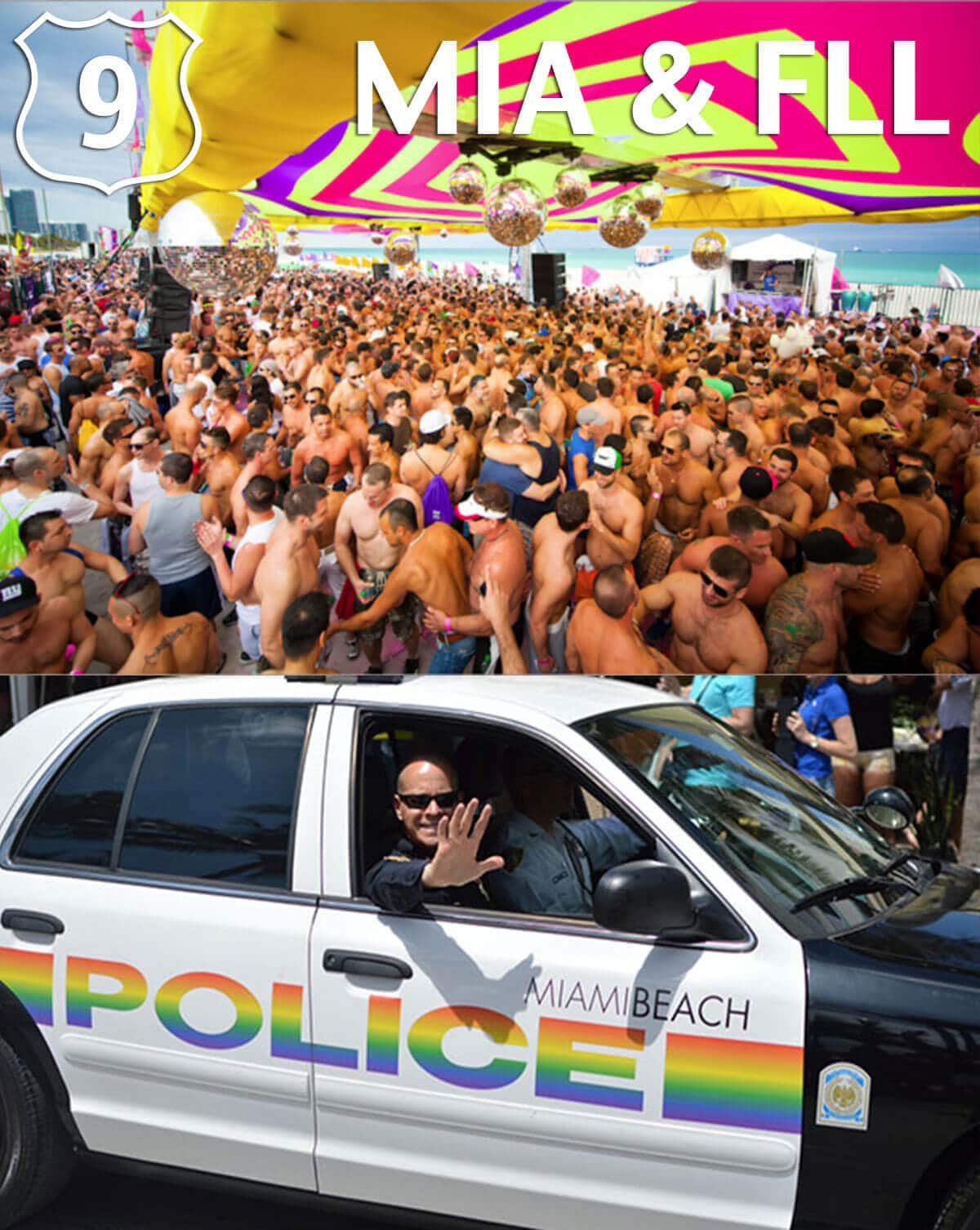 These two cities aren’t too far apart, and they both recognise the value of the gay tourism buck. Miami was always all about glam guys, parties, clubs and one of the best gay beaches in the world, but Fort Lauderdale has come a long way from its history as a ‘discreet’ gay destination for the middle-aged.

By the turn of the century, Fort Lauderdale had worked its way upscale, and now the two cities are fighting it out in an effort to glean the most gay tourists. One thing is for sure, you will be welcome! The party scene in Miami used to be unassailable, but Fort Lauderdale has rejuvenated itself with vibrant gay nightlife that should not be missed. They’re close together, so why not visit them yourself and decide which is the best place to let your hair down?

Don’t forget to spend some time on the 12th street beach eyeing out the bronzed hunks – and who knows? Maybe you’ll make a beach buddy! 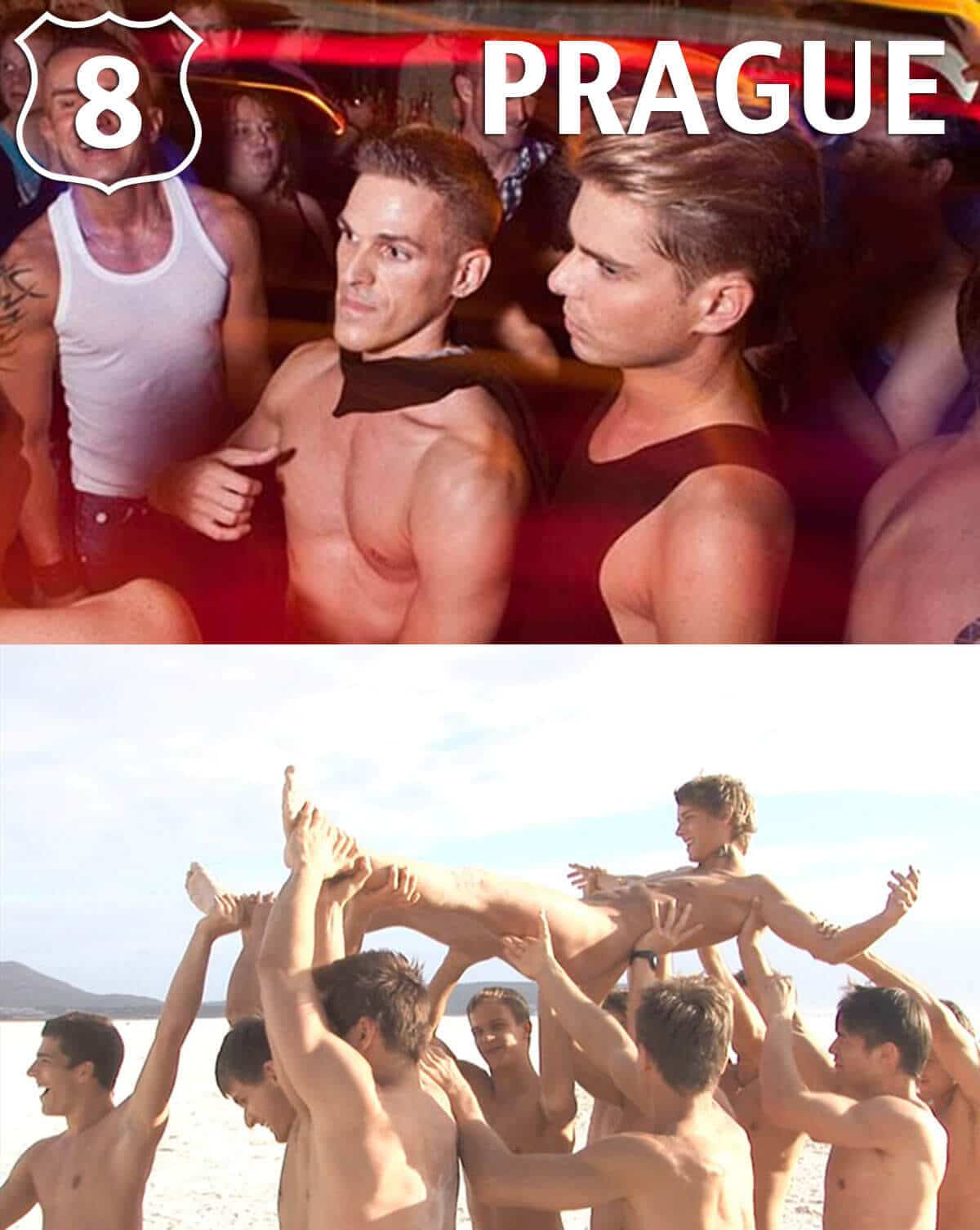 P.S. I personally met two porn-star guys in Prague – one at the airport and the second at a club. I decided not to hook up, and now I kind of regret it.

#7 Gaming and Guys in Vegas 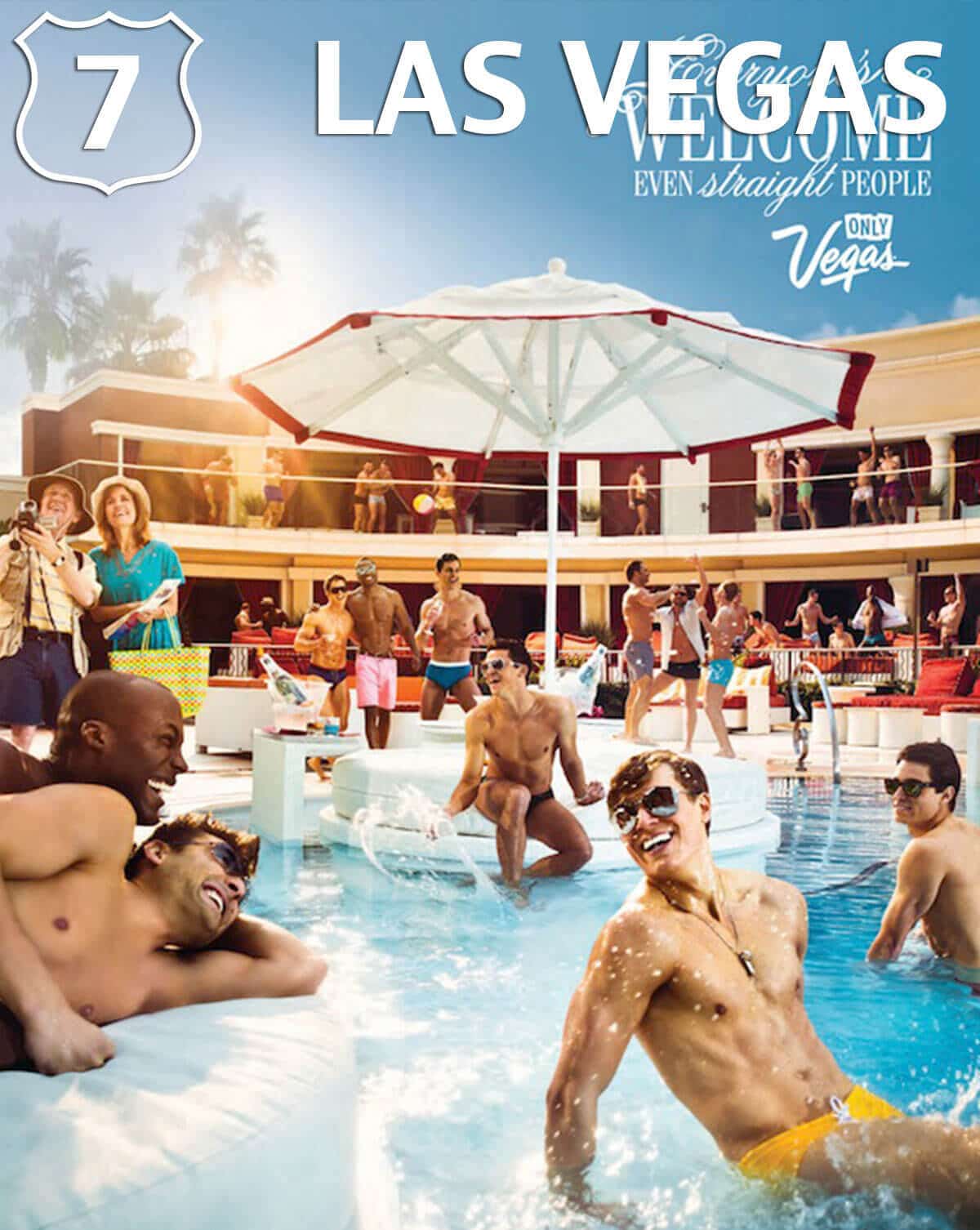 Everyone thinks gambling when you say the word ‘Vegas’ but it’s also a premier destination for gay singles and couples. Just one look at the Cosmopolitan Casino tells you that this is one of the gayest places on earth with its pink neon signs and camp décor including a massive chandelier, but that’s just the beginning.

Remember the Motley Crue song ‘Girls, girls, girls’? Well, it might as well have been ‘Guys, guys, guys’. Take in some gorgeous cabaret acts with some of the hunkiest men you could ever hope to see. Are they straight? You might have fun finding out!

Whether or not you’re there with a partner try a massage at the Encore spa. If you’re with a lover, you’ll like the way they leave the two of you alone together with a hot tub afterwards. But don’t get so cosy and romantic that you don’t hit Share nightclub, Vegas’ coolest gay club or Snick’s bar, and if you’re on your own, those would be good places to start! Find some friends and maybe more. 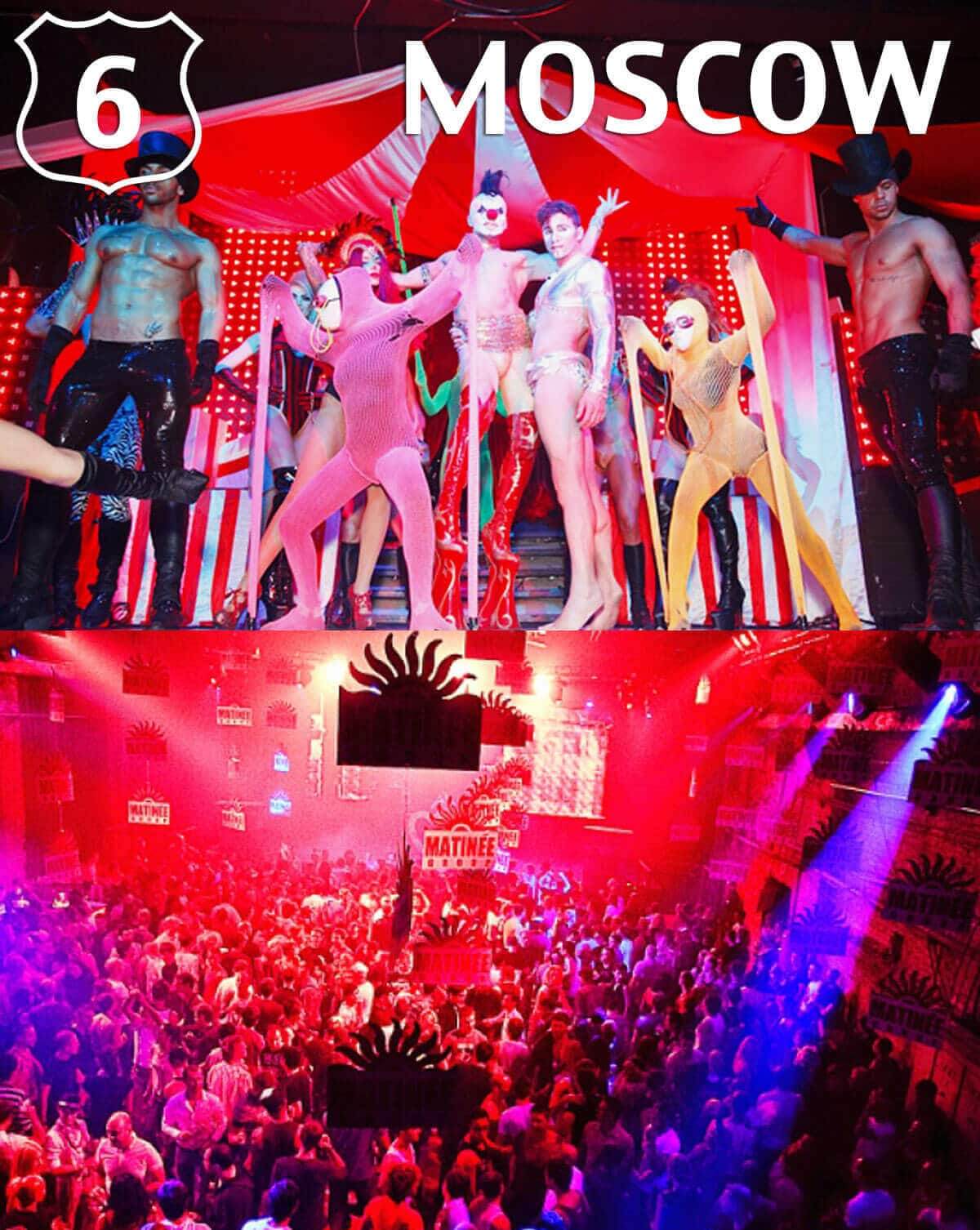 If you’re not up for a party on Friday or Saturday, Sunday is also fine. Head for the club ‘Propaganda’ for some red-hot house music. It’s full of guys who will drink and party till the small hours. You have to wonder how they’re going to cope with work on Monday morning!

The bright and noisy gay parties in Moscow somehow compensate for the greyness of the rather gloomy metropolis. 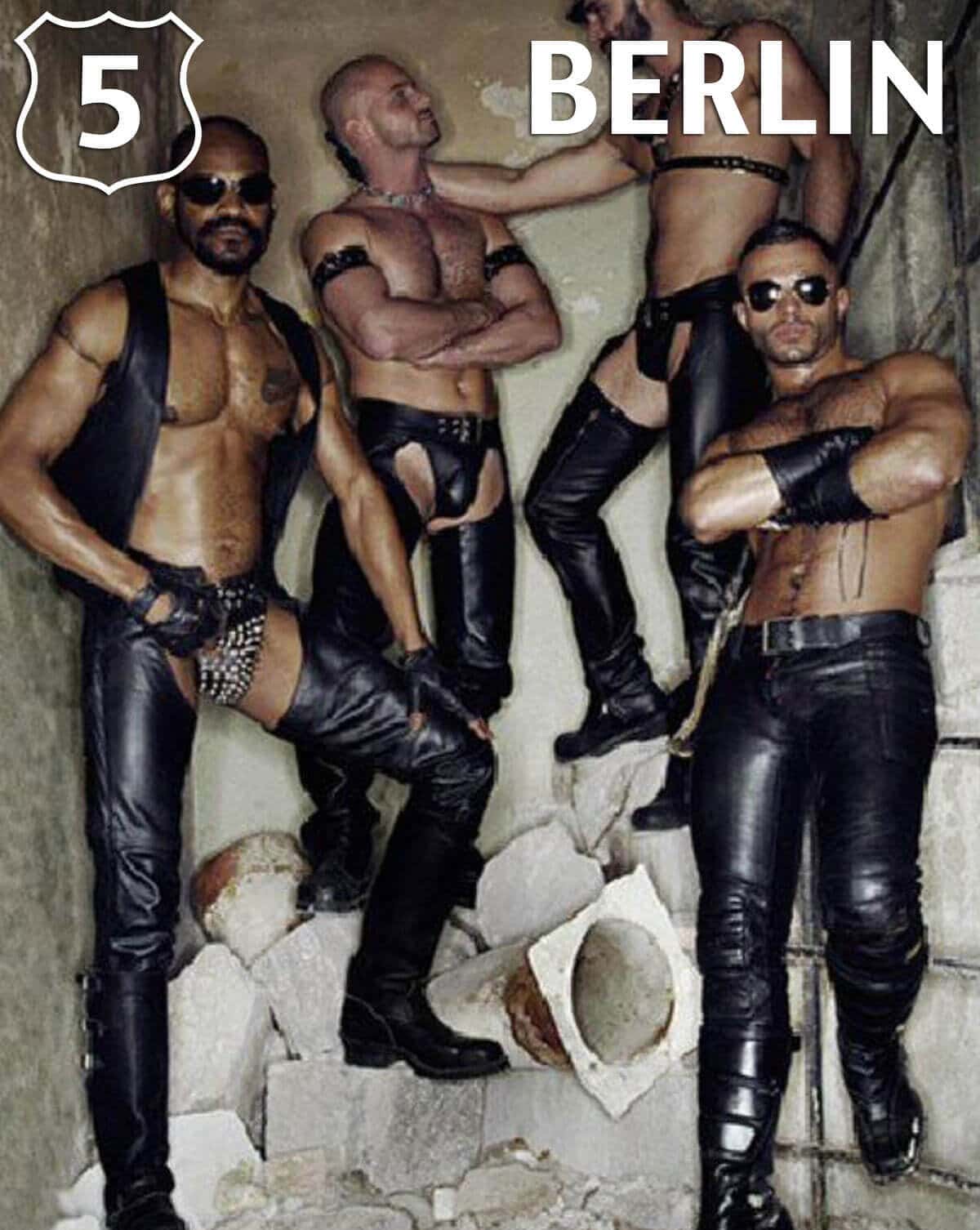 Arriving in Berlin, you might think yourself in hell. Nothing is frivolous or pretty, everything is functional and to the point. Then you realise: this is the city to come to if you want dirty sex – and no-one is dirtier than the Germans.

In a small triangle between the streets Anzbahershtrasse, Kurfuerstenstrasse Motzstraße there are more than 60 fucking institutions, some of which operate on the model of “sex + alcohol” and consist only of the bar and a dark room (all inclusive – German style). The rest are more traditional bars and clubs, devoted to particular interest groups and fetishes.

In Berlin, you don’t have to beat around the bush for long. Just get down to the nitty-gritty. Most of the time, you will immediately be offered an opportunity to go and get down to business immediately. It’s a hell of a factory, but this type of sex tourism – let’s be frank – does not appeal to everyone. 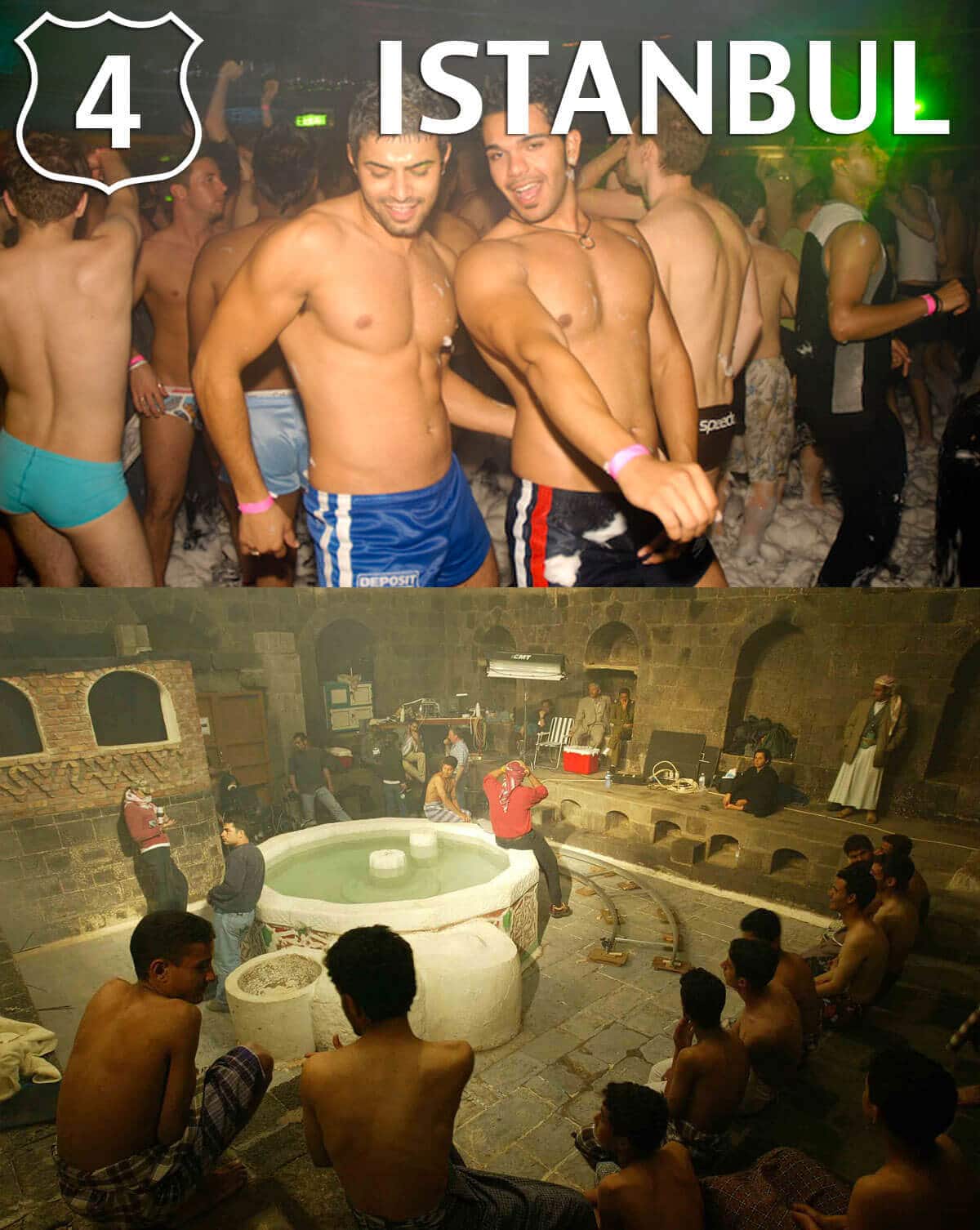 Istanbul is amazing. It is a huge metropolis, where poverty rubs shoulders with wealth, ease and luxury. The town, located both in Europe and in Asia (you have to draw the line somewhere), is world famous for shopping, sweets and of course, passionate guys who are happy to meet new friends on the street.

Despite the fact that Istanbul is home to a Muslim majority, gay life in Istanbul is diverse and colorful. There is also a gay sauna and specialized gay hotels. The biggest gay club in Istanbul is located right on the main street next to Taksim Square.

P.S. Every year Istanbul hosts a gay pride, but the hookup apps such as Grindr are blocked by Turkey’s law. Therefore, to get acquainted with the guys, you will either have to do so in person or by using other gay dating apps. 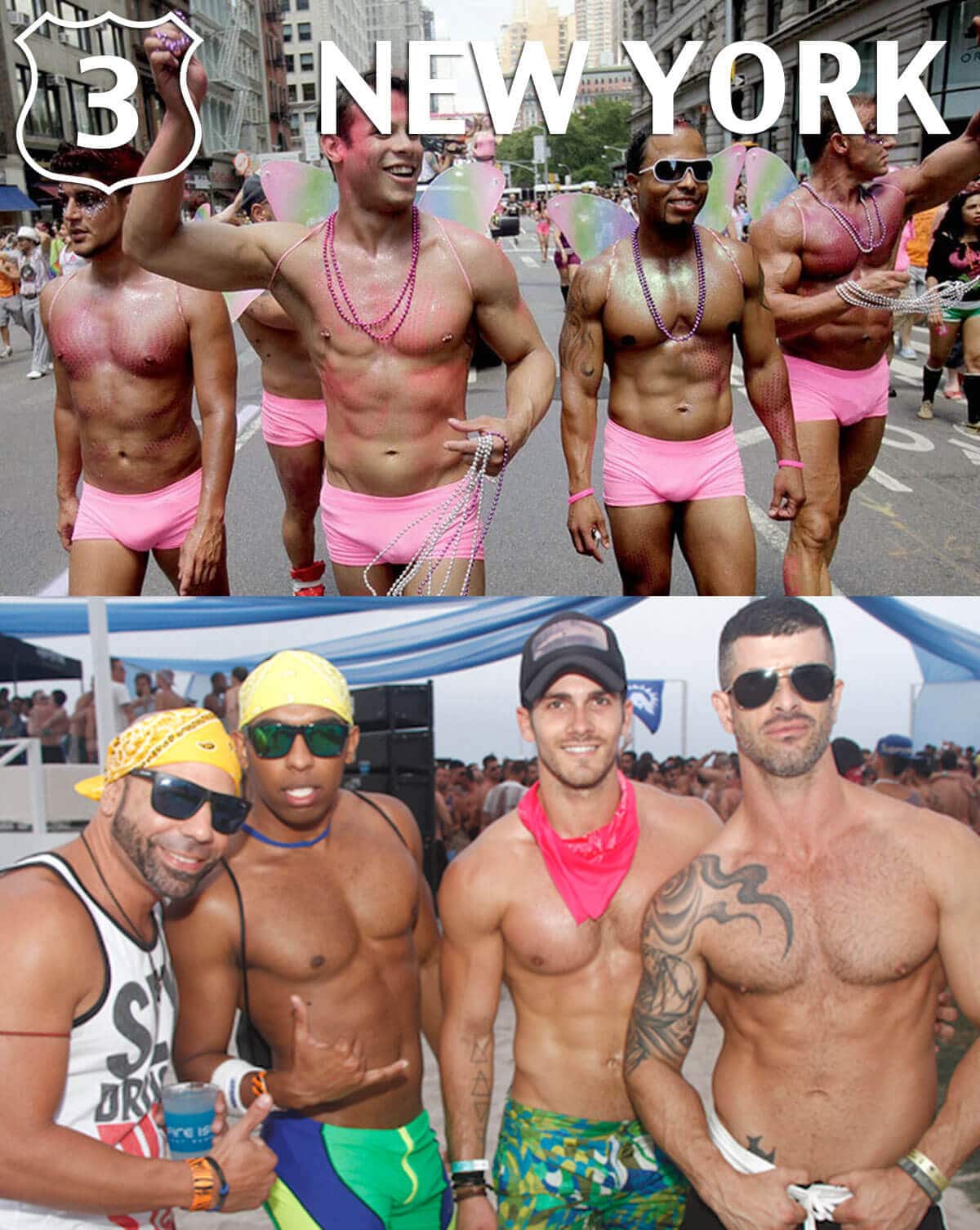 This city, with a population of 300,000 gays from all over the world, took the third place in our ranking. In 2014, the city took over from San Francisco to rank as the gay capital of America and became the most popular city in America for gay tourism.

Regular gay pride parades, legalized gay marriage, and a tolerant attitude towards gays residents attracts tourists from around the world. And this year, the city administration has even allocated $ 2 million on promoting New York as the best city for gay tourism. 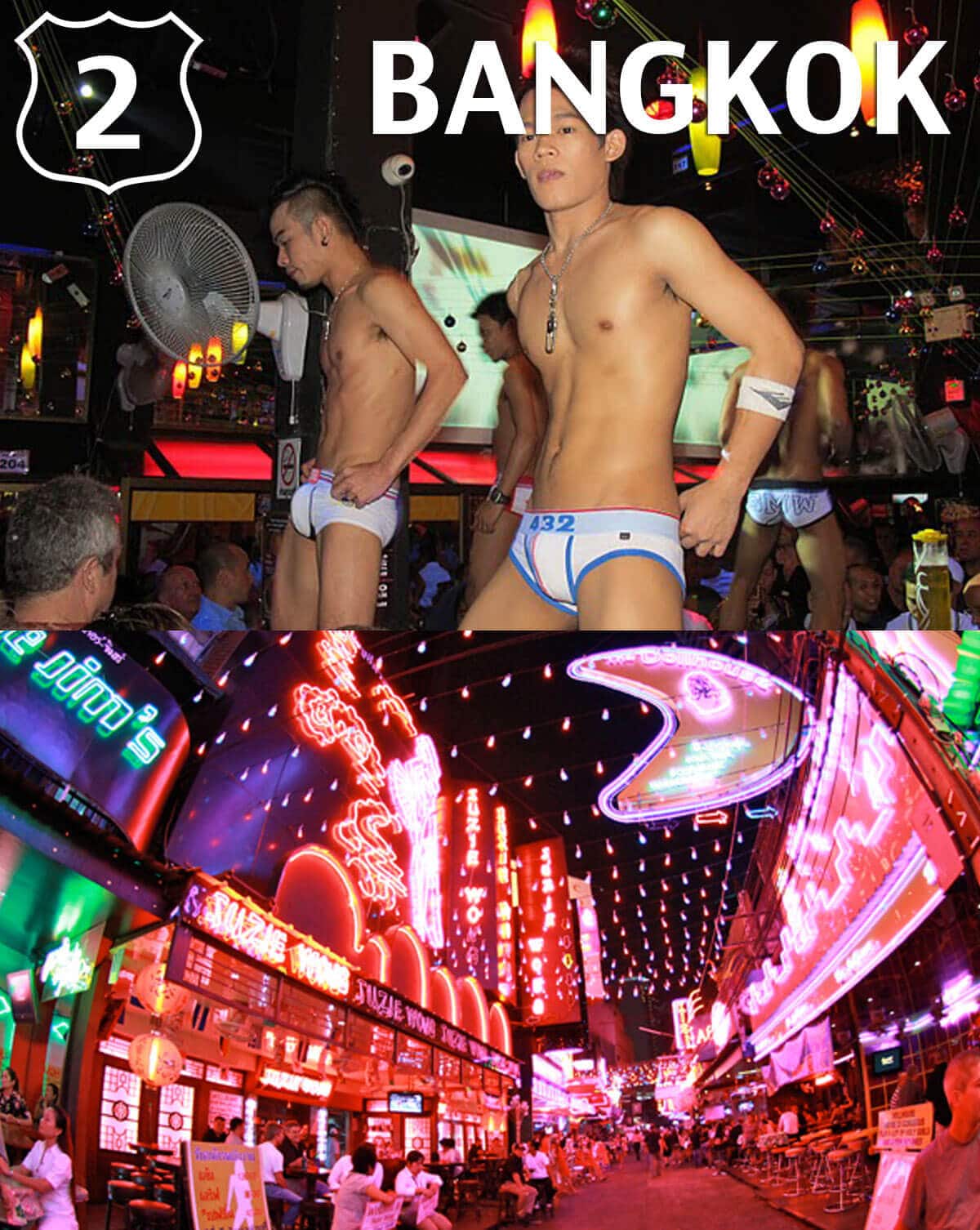 Bangkok is deservedly known as a paradise for gay tourists. This colorful Asian city never sleeps – the day will find you shopping at the biggest markets in the world, and in the evening the doors of Babylon open. Visit the largest gay sauna in the world, located on 6 floors, and then head for the center of gay nightlife in Bangkok – Silom.

Once there, you will find several gay streets on which there are gay clubs, shops, massage parlors, and dozens of go-go bars with shows in which absolutely naked guys do a variety of tricks, and sometimes have sex on stage. There is certainly a shortage of ‘angels’ in Bangkok. It’s a place to get down and dirty. Bangkok will give you unforgettable experiences and the only reason that it is ranked second, is that not everybody likes guys with an Asian appearance.

P.S. For a trip to Thailand residents of a large number of countries do not need a visa, and a return ticket can be found for bargain prices using our favorite app. The best time for tourism is from November to April. 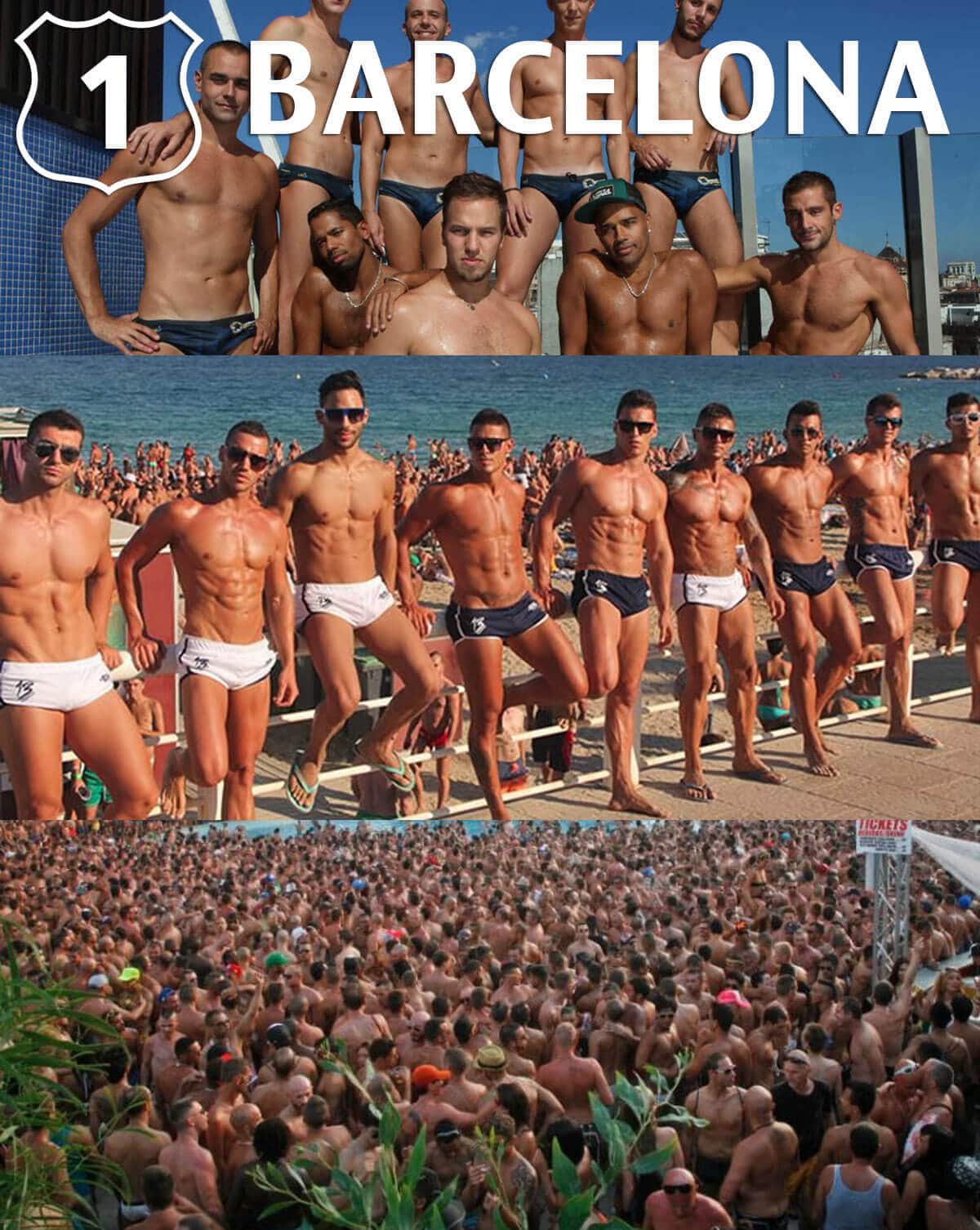 As you exit the airport you will see loving gay couples walking hand in hand. You are in Barcelona!

Facts and places about the winner of our top 10 gay destinations 2016:

P.S. Sitges, advertised as a gay city located 30 minutes from Barcelona, is not recommended. Despite the abundance of gay bars, hotels and clubs, you risk being the only young man among hungry European retirees. 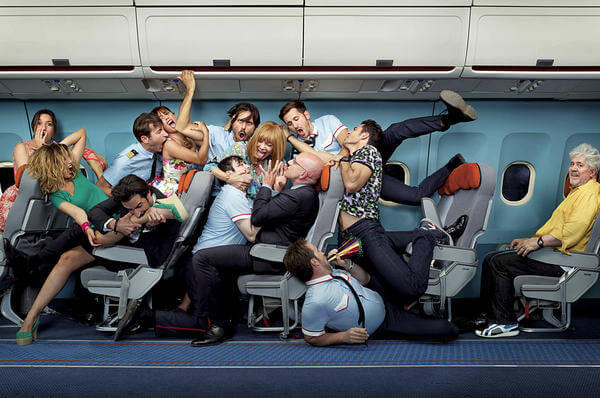 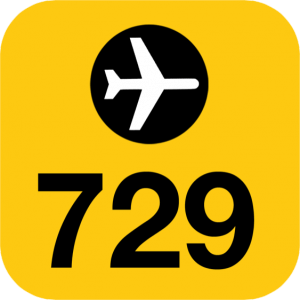